Shakespeare In The Park Whanganui 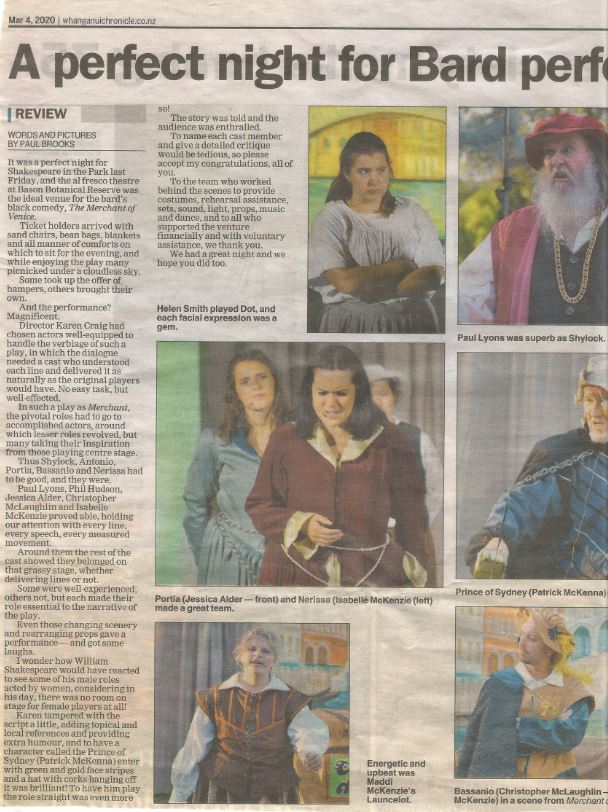 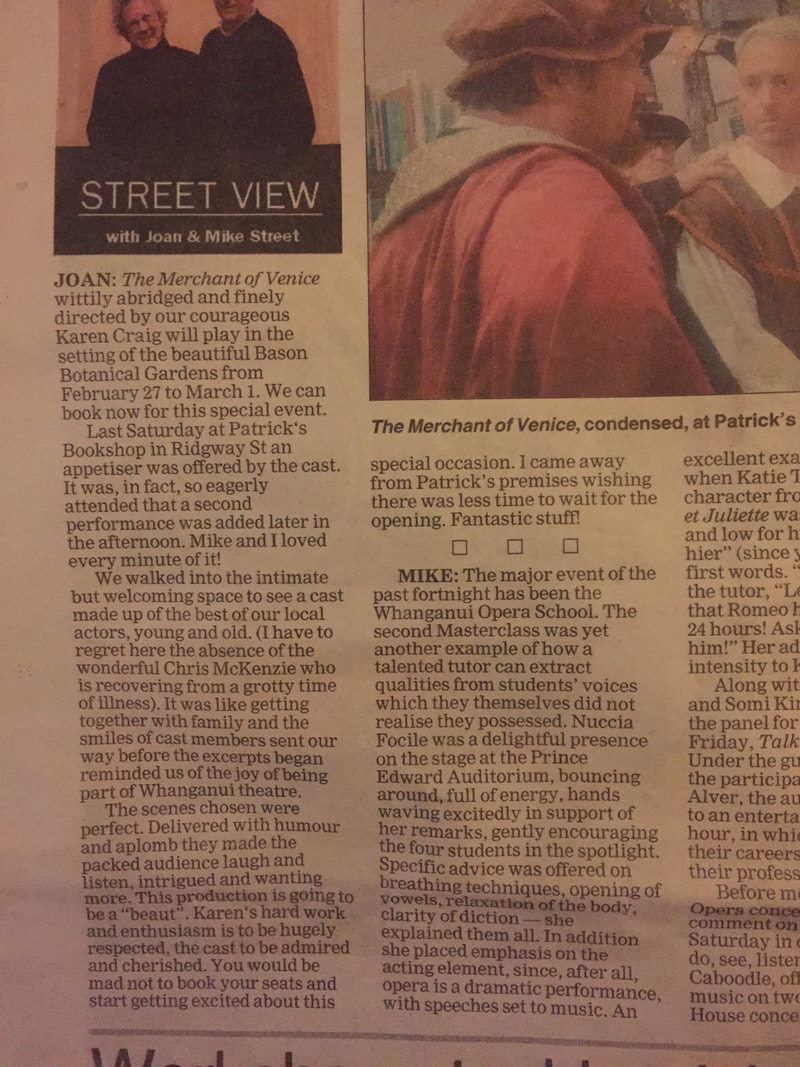 ​REVIEW: WChron 23 Feb 2018
The Tempest
By William Shakespeare
Bason Botanic Gardens
First plaudits to Bason Botanic Gardens Trust chairman Terry Dowdeswell who so astutely called the weather.
Thursday dawned with a tempest of torrential rain, and thoughts of cancellation loomed large in the mind of this theatre-goer. But as we headed out to the gardens for a serving of al fresco Shakespeare, it was - as Mr Dowdeswell predicted - a gloriously sunny evening. Will Metservice be calling on him?
The weather, the gardens, the set, the ambience ... it was a perfect platform for possibly the strongest cast ever assembled in Whanganui to brilliantly deliver director Karen Craig's vision of the Bard's darkish comedy.
Dwight Ballard was commanding - as he needed to be to carry the weighty role of Prospero, the overthrown Duke of Milan, banished with his daughter Miranda for 12 years on a magical island.
Now possessed of sorcerer's skills, he effects the shipwreck of a boat carrying those who have wronged him, and sets in motion his plan for revenge and to set the world back in its right order.
And as Shakespeare's rich and vivid imagery unfolds, so do the metaphysical musings of the play, with Prospero finally deciding: "It's better to act virtuously rather than vengefully." Perhaps a lesson for our current troubled world.
In the main, though, Craig's team play this for laughs - and there are plenty of them.
Phil Hudson's literally staggering portrayal of the drunken steward Stephano threatens to steal the show, and he has wonderful support from Melissa Hawkins as Trinculo (a foolish fool as opposed to Shakespeare's wise fools) and Chris McKenzie as Caliban, the island's misshapen "monster".
McKenzie brings out the humanness of Caliban, the tangata whenua of the island but now the slave of the colonialist Prospero. And you can read into that situation any allegories you wish.
There's another humorous double act from Sandi Black and Lauren Bradley as the treacherous Antonio and Sebastian (yes, Craig had to do a gender swap, the brothers becoming sisters as there were not enough men for the roles). Black impresses slipping easily into a dramatically villainous sequence.
Also upping the fun quotient is Kathryn Fleming, delightfully showcased as Ariel, Prospero's magical sprite and servant.
Nadine Rayner is a strong presence as Gonzalo, and Samantha Fleming, Robbie Tyler and Phil Portland round out a muscular and confident main cast who provided a wonderful evening's entertainment.
"We are such stuff as dreams are made on; and our little life is rounded with a sleep", so treat yourself while you can, and head out to the gardens. Tickets are available on the gate for Saturday shows at 3pm and 8pm.
We have been warned that it may be two long years before Craig produces her next outdoor show, so make the most of this one.
-- MARK DAWSON 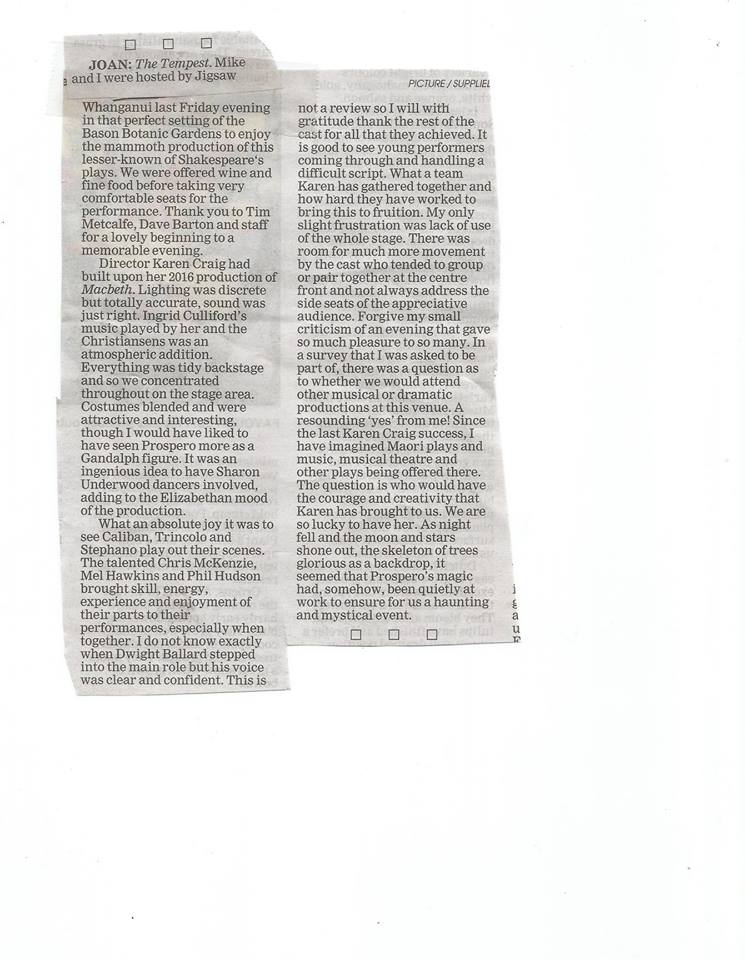 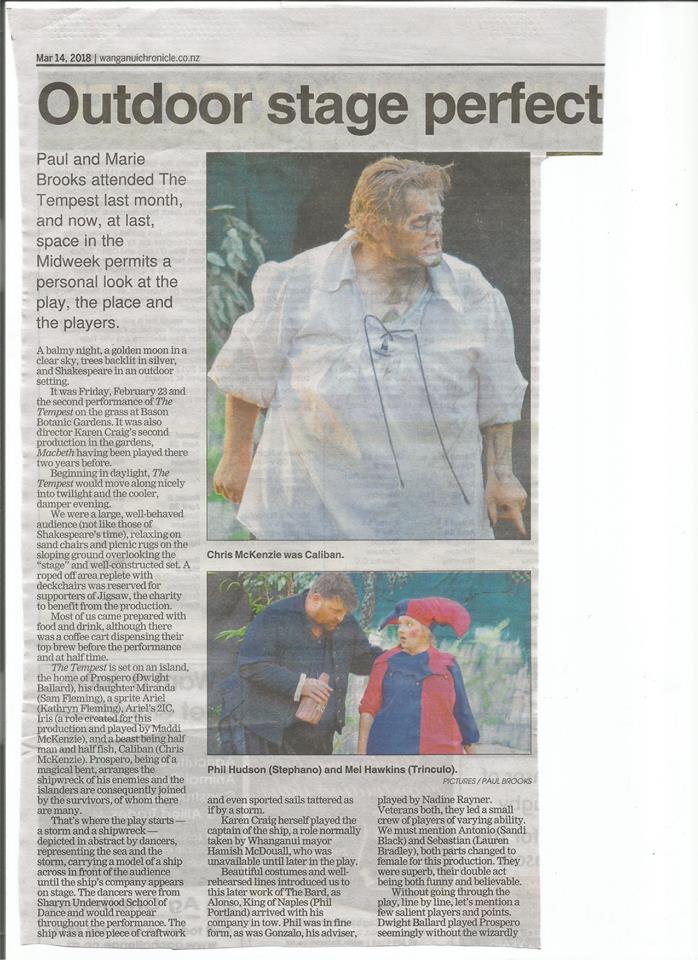 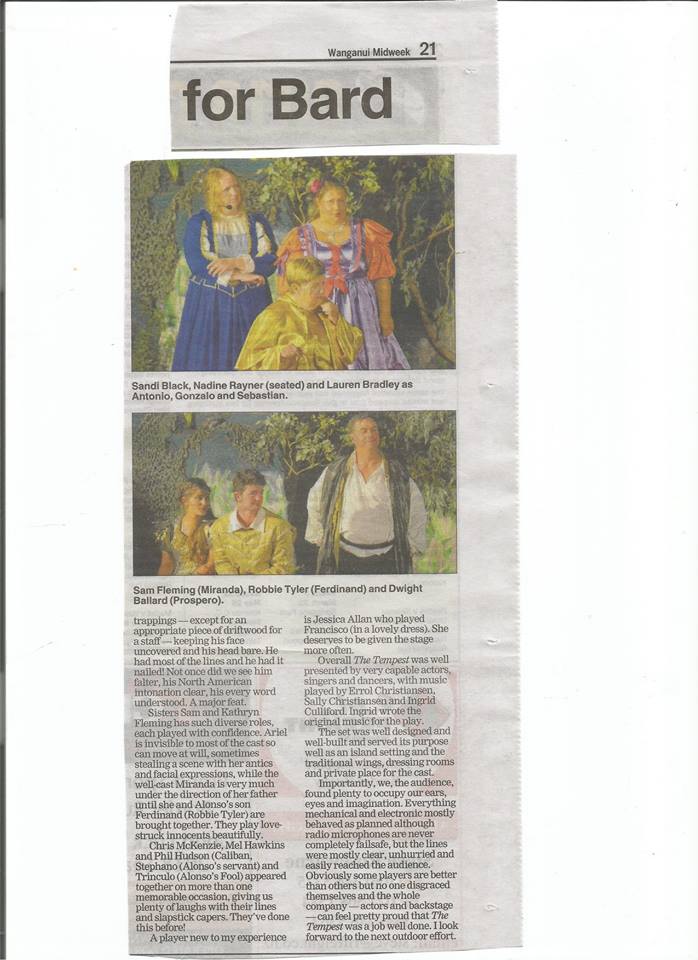 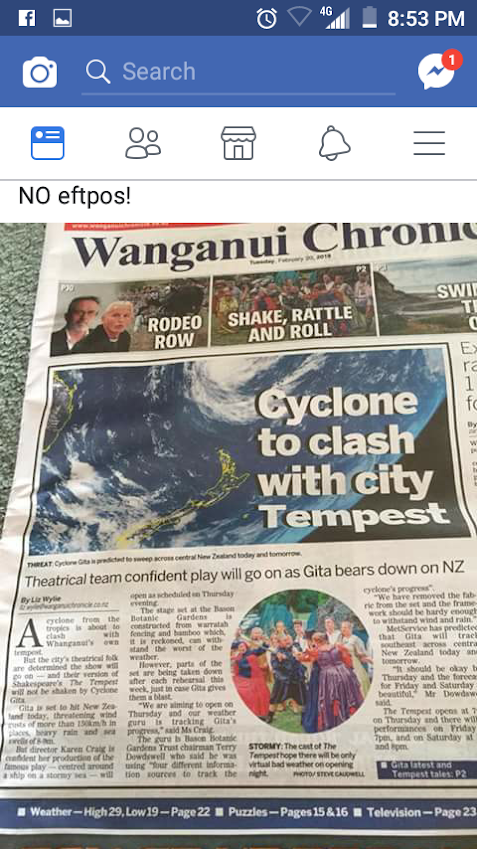 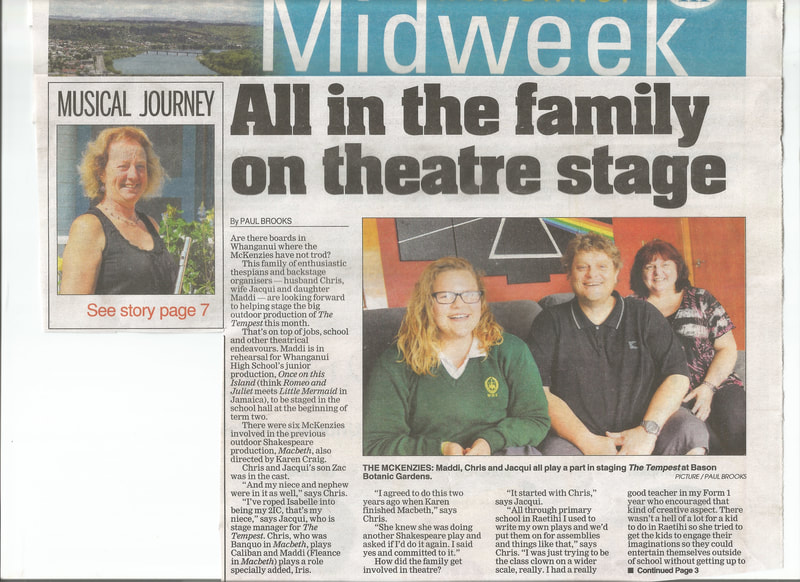 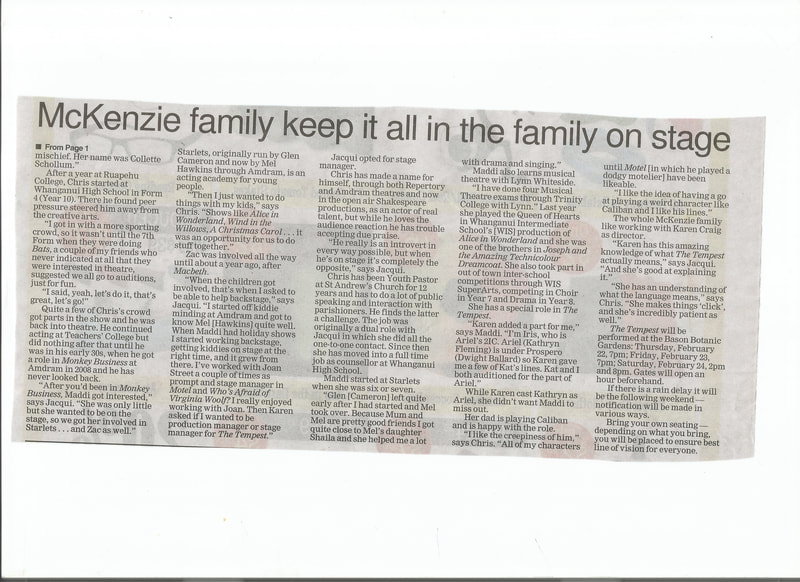 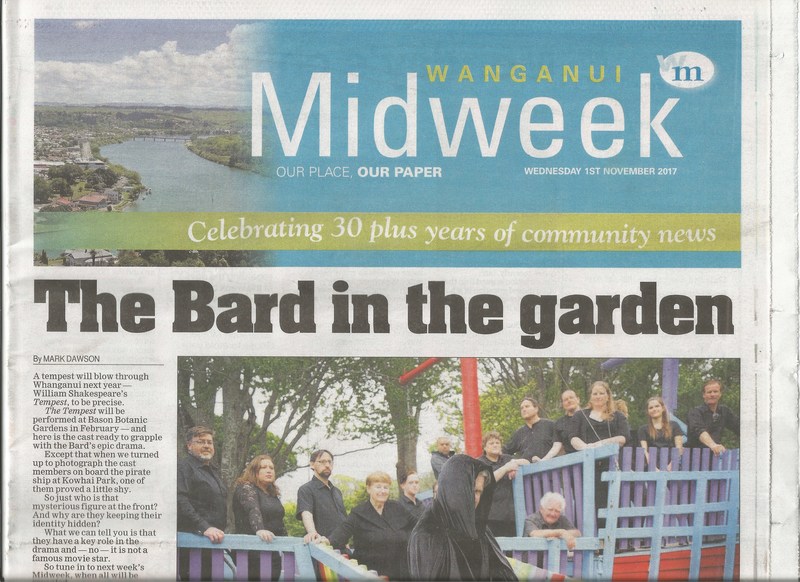 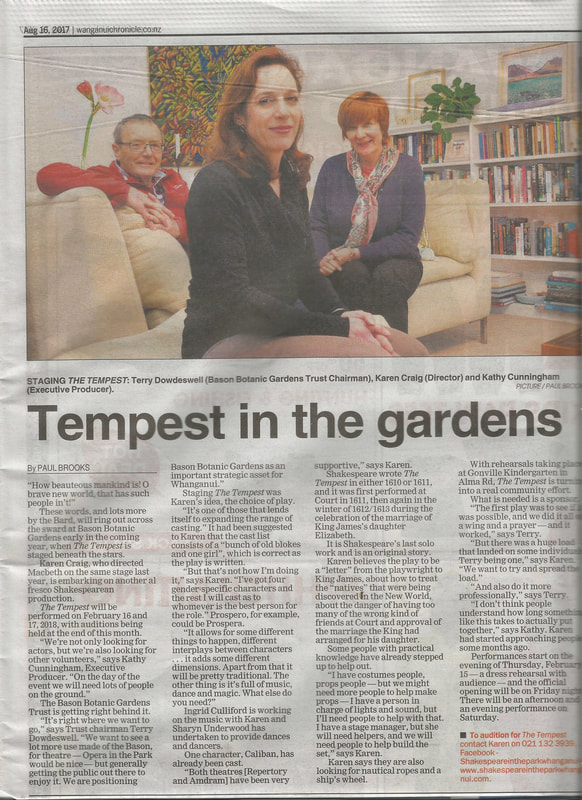 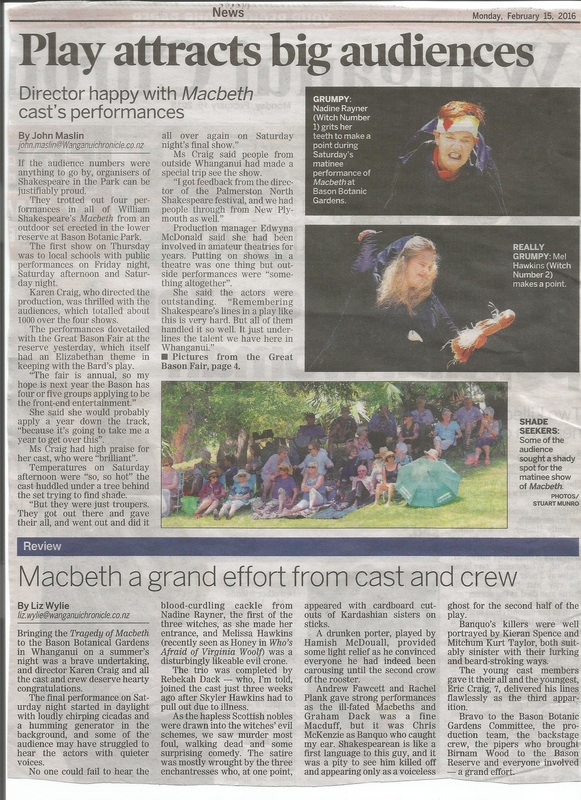 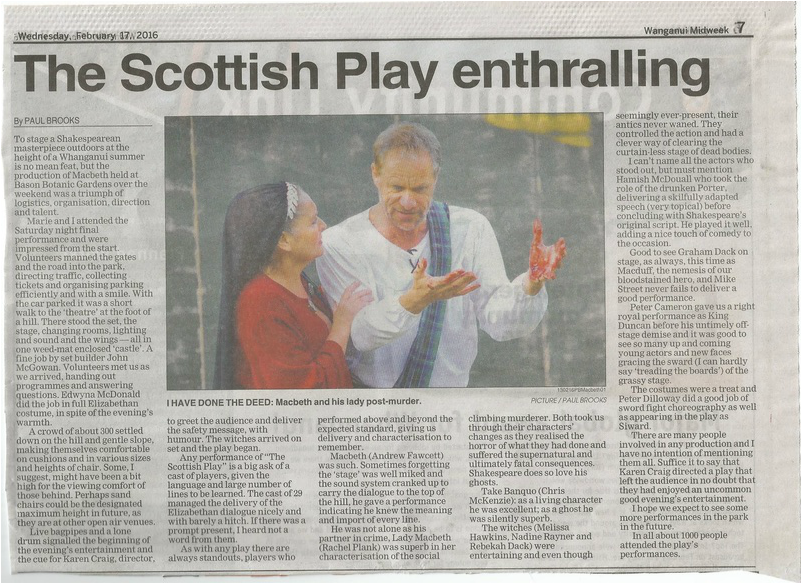